Ah, the Arcanite. This is the badass of the bunch. You want to play a warrior that flings around blasts of raw arcane energy? Everyone does, or surprisingly, only one player at a time really gets into it. I mean, if we had a full group of these guys my campaign world would probably look like swiss cheese. These guys have all the flash and power that you would expect from a fighter who channels raw energy instead of learning the intricacies of the craft. Of course, it’s all fun and games until they crit-fail themselves (or a party member) in the face. I mean, it’s still fun for me at least.

Oh right, posting things. We’ve had about a month break from the D&D campaign as some things came up, but we’ve finally gotten around to switching our gameday (works out WAY better for me), and picked up an experienced DM that also happens to be a 2e virgin (He started in, and runs, a 3.5 campaign). This is great! I think the campaign really needed another deeply experienced player, even if it is from another edition. Hopefully we can get a handful of consecutive game sessions pounded out and really get rolling again. I was starting to lose hope.

There’s some implications for the blog too in that I’ll be posting more D&D related stuff as I come across different rule changes, thoughts or ideas, the rest of the classes that I’ll have posted eventually. So in the interest of actually getting back to work, I’ll just leave the Arcanite class here. (mind the busted table if you please)

At level 10 an Arcanite becomes an Archon, and gains 2 points to each of their requisite stats. 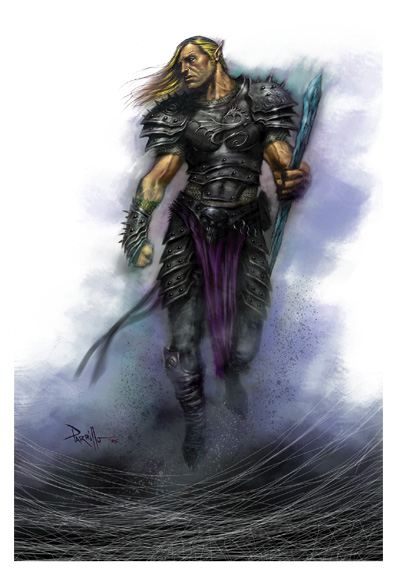 An Arcanite is the pinnacle of raw power. Combining the martial prowess of a seasoned fighter, with the magical affinity of an experienced mage, an Arcanite has learned to channel both simultaneously with incredible destructive power. Melee combat becomes an extension of their spellcasting ability, and they commonly fire off spells and blasts of pure energy in mid-swing of their chosen weapon. However, even though their power is great, Arcanites are taught from an early age to show humility, and hide their abilities until it is necessary. A true master of extraordinary power does not advertise it.

Arcanites are extremely effective in one on one combat. Typically, an Arcanite will find a target on the battlefield, carve out a path, and engage with extreme determination. Commonly, it is thought that an Arcanites weapon allows him to channel power, however, when that mistake is made, even their fists become weapons at their disposal. Extensive training in combat tactics allows an Arcanite to gauge the opposition before stepping onto the field. From the back lines, or before combat begins, they will often utilize their Spell Blast against large groups of enemies. The chaos that ensues allows the Arcanite to close distance without being suspect of arcane means, enter combat, and release a second wave of destruction later.

Arcanites do not carry a spell book, instead each of their spells are practiced each day by the use of weapon katas. Their spellbook is their body, as every muscle is trained to respond to the motions that their magical energies are drawn from. Initially, all their spells must be combat oriented, and only their starting spells can be pulled from the Players Handbook.

Spell Blast – At level 2, Arcanites may use the energy from an available spell as an attack. During combat they channel these energies directly through their weapon and may release it in two different ways. The first being a radius blast, and the second by focusing on a target and eventually directing it at multiple targets. The blast radius will damage friends as well as enemies.

Reactive Armor – At level 4, an Arcanite may store a Spell Blast in his armor as a normal action. The spell blast will then automatically fire off when a melee attack successfully strikes him. Only one charge of Reactive Armor can be applied at a time. Each charge costs a spell slot one higher than what is activated.

Arcane Mastery – At level 6 an Arcanite has mastered the ability to cast spells from both mind and body. At this point, they have gained the knowledge to begin casting non-combative spells through the use of a spellbook. All spells cast from a spellbook are done so starting as if this is their first level. This is reflected in the Spell Progression charts, spells cast from a book still draw from their normal amount of daily spells, but they are limited to how many can be cast from a book per day. They will never cast a combat spell from a spellbook, or even record one into it. They are unable to cast a non-combat spell using any form of kata, leaving them exclusively to their spellbook.

Arcing Aura – At level 8, the Arcanite can charge his whole body with magical energy by using a spell blast, one of these charges uses a spell slot 2 higher than activated. Anyone who comes within melee range of the Arcanite will take the damage from whatever level spell blast has been charged. This ability can be used three times per day and lasts for 3 rounds or until discharged. This allows the Arcanite to prepare himself before charging into battle and potentially catch a group of enemies with the auras area of effect.

Archon’s Challenge – At level 10 an Archon can choose a single target, and force them into a duel. A ring of magical energy blocks all normal missiles, and spell effects under level 3 from entering the ring. If anything tries to enter the ring, it must save vs. death, or die. On a successful save, the subject still takes 50 points of damage, ignoring any damage reduction. The target must be within 50′ when this ability is used, and the ring quickly tightens to a 30′ radius or less depending on the amount of room available. All other enemies and allies are forced out of the ring without any damage. The duration ends when one of the two are dead, disabled, or at the Archons command.