Well, my regular guys have up and switched factions again, and instead of going back to their Order toons on Badlands that are fully geared and ready for T4 PvP, they rerolled fresh on Volkmar like a bunch of T1-T3 loving dummies. Thankfully Minecraft has kept me a little busier than normal with non-WAR stuff to do playing on Blue Kae’s server. Still, I had the itch and rather than reach for some soothing lotion to gird my loins I’ve picked up my Spanner instead and I’ve been gloriously hammering away on the side of some Destro heads.

Seriously, I’m loving that Spanner Swipe is based on Ballistic now. I’m actually melee-thwack-a-nubbing for around 500 a pop. 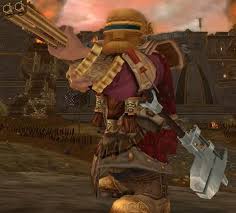 I allude to, of course, my love affair with the Engineer, the one class that fits like a glove and has gathered no dust or rust in the past 9 months. It’s been noticeable while playing on Destro that Engineers had gotten more deadly as time had gone by, but I really attributed that to not having played the class in so long.  Oh the things that have changed! The bugged Acid Bomb and Fragmentation grenades not hitting their target (but still splashing AoE) is a thing of the past. Turrets being little more than 3s Knockdown tools via Redeploy/Self Destruct has also moved right along since their damage has been beefed up quite a bit. I’m not seeing turrets hitting for 10 anymore, it’s more like 200. Close Quarters actually feels like it was designed for the class now as most of your abilities cast faster than they can accumulate set-back. I’m not particularly excited about Trench Fighting (or whatever CQ is called now, I think that’s right) being a flat and boring damage buff, but it’s in Tinker so I don’t really need to spec for it anyway.

You see, I am at heart a damage number loving kind of guy. Because of this, the Engineer Grenadier spec is perfect for me. Since I’ve been back playing I’ve cracked 300k damage in a couple of scens and peaked just over 20DB’s. I’m not sure how that stacks up for a handful of other Engineers living on Badlands, I’m thinking I’m in the upper 20%. Only RR62 to boot! Also, if you know how to “kite” with an Engi, you’re an evil deadly bastard. It’s called 6pc Invader + Throwing Arm tactic. Dot-Dot-Dot-Dot-Dot-Root-runrunrunrun-Dot-Dot-3s KD-runrunrun-Dot-Dot-Dead. A shout out for the Knights of Order and Ulvengard for picking me up right where I left off. If anything were to draw me in, it’s being invited back without question into a community that understands my value and is more than willing to exploit it.

Another thing, Badlands. It’s okay, you can buy in to the hype. This server really is all the good things people talk about and the performance issues have all dried up, as far as one can expect at least. A 500v500 fight on the open field is still going to be a slideshow, but I haven’t been crashing while standing around Altdorf, and I’ve had 0 issues being able to log on. One thing I regret is all the fellow Multiplayers who are going to be on the explodey and burney side of my grenades as they wander into the big boys playground we call T4. Sorry suckers, but in my book red = dead. If you’re lucky I’ll spam /toast a couple times before I pop Unshakeable Focus and drown you under dot ticks spamming just shy of 1k each. Iron Rock, you’ll always be the home to my Destro toons. It’s a good home. Uh… I can’t really say a whole lot else about Iron Rock. I guess I won’t miss getting raped by rr80’s?

Anyway, I’ll wrap this post up by saying that I’m going on my annual vacation down to the Florida Keys. I hear it’ll be 85 degrees nearly every day, and there’s no significant weather on the horizon. As such, I’ll be spending most of my time drinking on the beach and watching my 4 year old daughter run around and poke things with sticks. Maybe I’ll catch some fish. Maybe I’ll pet some manatees. I’ll almost definitely see some boobs that are three times my age, but that’s a side effect of Fantasy Fest in Key West this week. I will assuredly be missing on the entirety of the Daemon Moon Rising live event AGAIN (and it’s got the best interaction out of them all too!). Alas, thar be life. I will however undoubtedly be playing Minecraft online since that’s about the only thing my laptop can handle. So stop by Bluekaedia/Eternia and get your blocks rocking.
I’ll be back to my regularly scheduled non-posting and procrastination once I return on the 1st.

4 thoughts on “Roots and Sandy Beaches”