As one of my most played custom classes, I went back to the drawing board with the Shade frequently to try and figure out what it was exactly that players liked so much. Early on the bonuses from their Cloak were too high and overpowered for such low levels, so I’ve toned it down quite a bit. Their passive ability to penetrate MR when executing a backstab has been unchanged since inception, which seems quite powerful, but in practice isn’t used as often. as a d4/d6 HD class these guys are prone to getting in trouble when they’re in the thick of combat. Still, it makes for a good risk/reward opportunity, and I’ve killed one Shade in the process.

I think the main draw with them really is the access to the plane of shadow as a personal pocket dimension that they can retreat into as a normal action. Once they’re able to pull off this ability at level 6, it’s used constantly to avoid rough situations, and also as a method for storing most of the non-perishable loot the party comes across, if the Shade can be trusted anyway. Like any extra-dimensional space however, there is significant risk. Once the Shade decides he’s done with the party, or a terrible accident gets him killed, the pocket dimension goes along with him.

At the higher levels a Shade becomes more an instrument of disruption on the battlefield. Wading into conflict with an aura of fear and darkness is enough to rattle any low HD creature, and is generally enough to make a higher HD enemy think twice about being overly aggressive. Their final ability represents their deep integration into the realm of shadow, darkness, and mystery. Being a great initiator means taking a few shots from enemy casters, and the corrupting influence of the shadow plane can turn these spells back on the caster, or just cause them to fizzle out entirely. It’s a powerful ability, significantly moreso against lower level casters, but not impossible to get around, and not reliable enough against equal or more powerful casters to be of great utility. 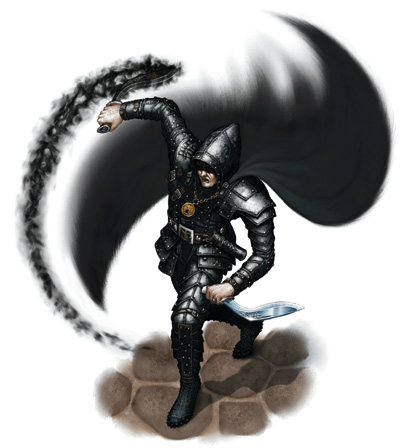 Shadows, darkness, mystery, fear. Some people are drawn to these things, they seek answers, or solitude, or a place to hide. For an arcane spellcaster, seeking the darkness can quickly lead to powers beyond control or answers that would drive any normal man to the brink of insanity. The Shade begins with a rogue-like disposition of treating the darkness like the tool that it has the potential to be, and toeing the line of balance between wielding this power and falling into the brink. At its core, a Shade is truly a rogue seeking more power and learning the arts of the arcane to further embrace the shadows around him.

In combat a Shade is deadly, but also vulnerable as a low HD class. They learn to warp the shadows into places that could not normally hide them. They are able to backstab as a normal rogue, but with the added benefit of piecing any magic resistance and bypassing most saving throws on a successful strike. A Shade well versed in his rogue skills for sneaking around is a very deadly ally on the battlefield. However, not all foes can be dispatched with a single blow, and the Shade can use his powers over darkness to invoke fear or chaos as well. When all else fails, the Shade can tear a hole in the fabric of the world and enter a small sanctuary on the plane of Shadow. However it is no place for the living and cannot sustain life. Food spoils quickly, and water becomes undrinkable as the shadow permeates it.

Within the party, the Shade can be a valuable scout but often chooses not to risk it if someone else is more suitable. Otherwise they are content with being among the core of the group, blending in. For as much as they walk among the shadows, socially, a Shade tends to be straightforward. They have a strong grasp of morality and where the line is drawn in the sand. Temptation to give in to darkness is one of the strongest lessons a Shade is taught, often staring deep into the abyss of madness as part of their training. The consequences to them are perhaps more real than most other wizards, and while they know where the line is, crossing it is a whole other matter.

Cloak of Shadows –  A Shade quickly learns how to wrap the shadows of the world around himself in order to both conceal  and obfuscate himself. This results in a bonus to AC and Hide in Shadows, while allowing him to make combat actions without breaking stealth. His cloak can be called at will, but has a limited number of actions that can be used each day while concealed.

Imbued Backstab – At level 4 a Shade is trained to channel the energies of a spell directly through his melee weapon, and add the damages from it to his backstab multiplier. It is also used to bypass the saving throws of most spells and magic resistance.

Shadow Plane Pocket – At level 6 a Shade can open a portal to his own personal shadow realm as a normal action. This area is undetectable, and no other person or living entity may join him in it. There is no way to see outside, nor any way for anyone to see inside. Items and the player must enter fully, or not at all. Perishable items will decay at 10x their normal rate, water will become spoiled within hours, if ingested they will grant no sustenance and cause a mild sickness. Inside there is 10’x10’x10′ of space that the Shade can do with as they please.

Become The Darkness – At level 8 a Shade can shroud a large area (40’ x 40’) in unnatural darkness emanating from himself for 4 rounds. For each creature witnessing the darkness coming, they must save vs spell or also be affected by Phantasmal Killer (Wiz 4). For each creature saving in this way they receive a +1 bonus. The Phantasm dissipates with the darkness.